Amy Freed’s “Shrew!” at South Coast Rep, “Triplets of Belleville” at the Barclay 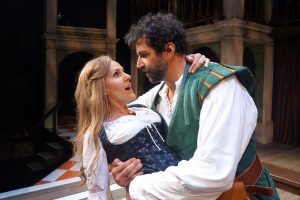 Susannah Rogers and Elijah Alexander in Amy Freed’s “Shrew!” at South Coast Rep. Photo by Tania Thompson/SCR. If Amy Freed tripped herself up in her last at-bat at South Coast Repertory (in my estimation), she has scored a solid home run with “Shrew!” While the first act of 2017’s “The Monster Builder” was so ingenious she couldn’t follow it up with a worthy second, her adaptation of Shakespeare’s “The Taming of the Shrew” is consistently clever and often laugh-out-loud funny. That’s no small accomplishment considering the Bard’s evergreen romantic comedy is one of the most frequently parodied and spoofed plays in the canon.

There isn’t a weak link in the 13-member ensemble under Art Manke’s attentive direction. Susannah Rogers is a vibrant Katherine, doubling as an aspiring playwright (Freed’s alter ego) in the prologue. Mike McShane shines as Gremio, an elderly suitor to Bianca; Danny Scheie and Bhama Roget are delightful as the clowns. The show (which runs through Apr. 21 in Costa Mesa) is further enhanced by Ralph Funicello’s scenic design and David Kay Mickelsen’s costumes.

Pianist Joyce Yang’s recent collaboration with the Aspen Santa Fe Ballet was one of those offbeat experiments we seldom see in Orange County but are more than welcome. The show at the Irvine Barclay Theatre courtesy The Philharmonic Society provided choreographed counterpoint to the music of Philip Glass (seemingly improvisational at times) and Leoš Janáček (much more vigorous and often poetic). The most imaginative and polished choreography, that of Jorma Elo set to the music of Robert Schumann, was saved for last—an athletic piece accented by whimsical humor, all too rare in modern dance.

The Barclay serves as the venue for another special mixed media event this Friday when it screens the surreal 2003 animated French film “The Triplets of Belleville” with a live score. Not just any score mind you, but the original Oscar-nominated “Le Jazz Hot” score, recreated by its composer, Benoit Charest. The film, written and directed by Sylvain Chomet, is a convoluted farce set in Pre-World War II France and involves the kidnapping of a Tour de France cyclist.