“Good People” at the Chance, “Conversation,” “Urinetown” at Stages 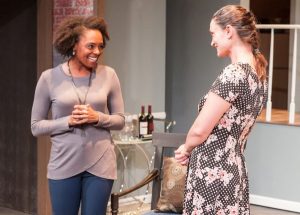 Taj Johnson and Amanda Zarr in “Good People” at the Chance. Courtesy Doug Catiller, True Image Studio. Where’s the comedy in a “dramatic comedy” about a single mother struggling to keep her head above water? Trust me, there’s plenty of it in “Good People” by David Lindsay-Abaire (in its Orange County premiere at the Chance Theater in Anaheim through May 18). This is an edgy study of class distinctions, set in South Boston, and what it may take to survive when push comes to shove. It’s a tad too long, but the explosive second act packs a wallop.

Amanda Zarr (“In a Word”) delivers another outstanding performance, with a dialect as authentic as any you’ll hear; we never really warm to her unlikeable character but we do come to understand her, to Zarr’s credit. Taj Johnson offers a wonderfully nuanced characterization as the wife of her well-to-do old flame, to whom she’s reached out for a helping hand. They’re supported by a fine ensemble under the sharp, sensitive direction of Jocelyn A. Brown.

Across town, Eugenie Carabatsos’ “We Will Not Describe the Conversation,” is getting a fine production that should not be missed by anyone who enjoys original theatre. This chamber drama (at STAGEStheatre in Fullerton though May 19) begins as a character study of a by-the–button masseuse, a tardy customer, and her estranged brother.

It’s a quirky, intense little piece shifting back and forth in time, and slightly confusing at first. Only a highly skilled director like Katie Chidester could pull it off; somehow she juggles it all brilliantly. Her staunchest ally in the solid three-person cast is Andrea Marie Freeman, who gives us an intricately layered performance (as Sonya, the needy customer) that’s a marvel. The set and staging are deceptively simple.

“Urinetown the Musical” (at STAGEStheatre though May 20) is yet another musical that’s ultimately too long, too loud and too silly. But wait. Mark Hollmann’s and Greg Kotis’ show isn’t quite like any other musical. It’s not afraid to make fun of itself, and the in-jokes start flying almost immediately. And while there are a few “gross” moments, it never descends to the sewer-level of “The Book of Mormon” and is unlikely to offend anyone but the bluest of blue hairs.

Though things get a little chaotic by the finale, there’s a lot to like in a show with clever lyrics and snappy music that mocks musical theater. Standouts in the huge high-energy cast include Brian J. Cook, Brian Wiegel, Garrett Chandler, Debi Tuiolosega, Mario Andrew Vargas Jr. and Mady Durbin. Director-choreographer Edgar Andrew Torrens has somehow corralled the whole thing onto a very small stage without that squeezed feeling.