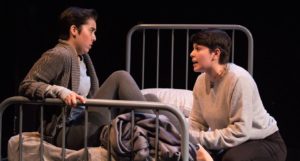 Celeste Alvarez and Haley Izurieta in “Allegory of the Cave” at OC-centric. Image by Amy Lauren Gettys.

If you think you’re going crazy in the heat, the folks at Fullerton’s STAGEStheatre are one up on you. They’ve gone completely off their nut, at least the cast and crew of William Robert Carey’s “Idol Minds.” This is not one of those sophisticated French farces; it’s the kind there’s only one way to play, with no room for subtlety. Balls to the wall. Whacked out to the max. So far over the top your only choice is to buy into it at the outset, then sit back and let the lunatics run the asylum. Yes, the show (through Aug. 26) gets a little too silly at times, but that comes with the territory.

Superstar Dominic Lourdes’ grave is robbed by two goofballs (Richard Burnes and Stan Morrow) who figure they’ll split a million bucks’ ransom but fail to consider how avaricious the women in their lives (Jeseka Luna and Katt MacLaren) can be. Director Jason Sutton is crazy like a fox, encouraging the cast to run riot, all stops out. The ensemble is clearly up to the challenge, so much so you may start to question your own sanity as you stumble out of the theatre.

Want to see a play about a young woman in a mental hospital who’s not sure what the heck she’s doing there? You do if it’s as compelling as Darren Andrew Nash’s “Allegory of the Cave” at OC-centric, the annual new play festival at Chapman University. Celeste Alvarez (as Leah, the woman) connects with the audience in a way that epitomizes what’s unique about live theatre at its best, that wondrous if hard-to-define quality that can’t be duplicated on TV or film; she’s evenly matched by Haley Izurieta, who plays her roommate. They’re in good company at OC-centric—Amy Rebecca King and Vercylanne Bustos offer fine performances in the festival’s program of one-acts that features plays by Cambria Denim, Buddy Farmer and James Colgan.

OC-centric (through Aug. 26) has been running for eight years now, presenting new works by So Cal artists, including many in their premiere productions. It’s the kind of festival that should be hatched in and funded by theatre departments on university campuses everywhere—helping to develop the next generation of playwrights, not to mention actors and directors—but sadly is not. Is every play a winner? No, but I’ve seen most of the offerings at OC-centric the past eight years, and they are of a consistently high quality.