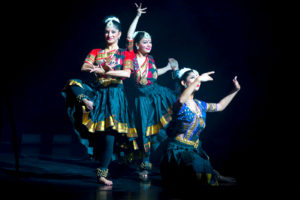 The exotic dance form, so popular it’s being taught at dance schools throughout Los Angeles & Orange County area, has also manifested itself in a dance spectacular called “Mystic India: The World Tour.”  The eye-popping stage show touches down locally Mar. 10 at La Mirada Theatre for the Performing Arts.

Dance and theater combine with spectacular special effects and an explosion of color rivaling the best 4th of July fireworks displays. The costumes and sets have been custom-designed by Shah and handmade in Mumbai by a team of 40 designers and workers over the course of four years.

The Kaleidoscope Chamber Orchestra made a splash of its own in its long-awaited Orange County debut, at Chapman University’s Musco Center for the Arts. The self-conducted Los Angeles-based ensemble, now in its fifth season, opened the program with Caroline Shaw’s Entr’acte before moving on to Sergei Prokofiev’s Piano Concerto No. 3.

The offbeat concerto, which the composer felt was misunderstood in its 1921 debut, was performed with finesse with Irene Kim at the piano. The orchestra’s key offering of the afternoon was a first-rate interpretation of another piece that had a less than ideal premiere—Beethoven’s beloved Symphony No. 5.

“Iranian Cinema: Before and After the Revolution” (available on DVD from Kino Lorber) offers a inviting trilogy of documentaries by Jamsheed Akrami on a subject of interest to film enthusiasts the world over. “Friendly Persuasion” (2000), the first of the three in the two-disc set, introduces us to a group of filmmakers who are taking daring chances and capturing attention far beyond the Middle East.

Talking heads include Abbas Kiarostami (whose “Taste of Cherry” was the game changer, winning the top award at Cannes Film Festival two decades ago), Mohsen Makhmalbaf and many others. Kiarostami, who’s also the subject of a bonus short in the set, talks about the childlike quality of his films and how Iranian films utilize children as “a metaphor for discovering the world.” He decries the lack of support for artistic films in Iran, which produces some 70 movies annually and bans American pictures in favor of national product.

Makhmalbaf, who has seen his films mutilated on Iranian TV, discusses censorship. The latter topic figures prominently in the two follow-up documentaries that combine to provide an in-depth portrait of the humanistic cinema—an image greatly at odds with the one best known to the outside world.