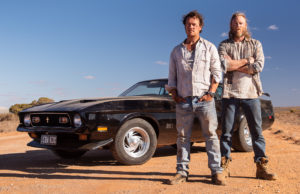 Want to see a new Hungarian film? I do. It’s called “Curtiz” and it’s about the complicated life of Hungarian-born director Michael Curtiz during WWII and the making of “Casablanca.” It’s screening next week at the 20th annual Newport Beach Film Festival, running April 25-May 2.

I always look forward to the festival’s Irish Spotlight, which offers three feature films in competing time slots at NBFF this year. “The Belly of The Whale” introduces us to an odd couple who combat misfortune by planning to rob an amusement arcade. “Metal Heart” is about a sibling rivalry between fraternal twin sisters. “Rosie” centers on a young mother trying to protect her family from homelessness. There are also three programs of Irish short subjects this year.

The festival is also screening films from Mexico, Chile, Brazil, Colombia, Japan, Korea, China, Sweden, France and Italy. NBFF shows more short films than any major film festival in the U.S. — over 200 this year, including films from local colleges and universities, and “Down Her Shorts,” a program of films exploring female sexuality.

“Locusts,” an Australian crime thriller showing this Friday night at NBFF, is one of the feature films I’ve had a chance to preview. Lean and mean, this tightly-wound 86-minute drama wastes no time getting started; an intense man in an undershirt, smoking a cigarette, examining a revolver, confronts the viewer. “You’re doing it all wrong!,” he exclaims, proffering the gun. “There you go, try again. Go on! What are you going to do?” In barely a minute, the film has our complete attention.

A well-dressed entrepreneur named Ryan who resembles Johnny Depp (Ben Geurens) learns at his father’s funeral that Dad was “no saint.” After he shares a drink with his estranged, long-haired, bearded brother Tyson (Nathaniel Dean), an ex-con on parole, his father’s scruffy “friends” make a demand on him for $100,000 Dad supposedly owed them; pay up or you’ll never see your brother again, they tell him. Isabella, a sympathetic bar maid (Jessica McNamee) who happens to be his ex-girlfriend, offers to help him.

This bloody, violent drama from Closereef Productions/Estranged Films is pretty strong stuff. “Locusts” pulls no punches and does not flinch; it will not be to everyone’s taste. Certainly not mine. It is, however, exceptionally well made, and unlikely to disappoint fans of the genre. The film evokes the Coen Brothers’ “No Country for Old Men” without attempting to imitate it, though it has touches of ironic humor—such as when Isabella’s little girl offers Ryan the use of a toy sword: “It looks like you need protection.” The publicist’s description of “modern noir western” is pretty close to the mark.

The filmmakers’ technical skill is evident on both sides of the camera. Written and produced by radiologist Angus Watts, the film is directed by Heath Davis (whose “Book Week” is also screening at NBFF). Chris Bland’s cinematography is no less than stunning; Burkhard Dallwitz’s moody score fits the picture perfectly.