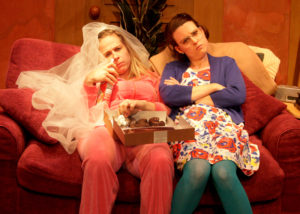 Ever have one of those days where you can’t get started? David Hare apparently had one, and managed to turn it into a hit play called “Skylight” (at Anaheim’s Chance Theater through May 19). The romance between Kyra and Tom depicted in this overly long drama has run its course when the lights come up. The play itself takes an interminably long time to start cooking and get to the point; there’s a lot of unnecessary exposition and dialogue that goes nowhere.

However, this is a terrific piece of theatre once it gets moving. There’s an outstanding 90- or 100-minute play here centering on the up-and-down relationship between these two very different people, a London teacher who is devoted to the task of helping disadvantaged kids and a restaurateur who is dedicated only to making money; unfortunately, it takes Hare two hours and 20 minutes to tell his story.

Kim Rosenstock’s “Tigers Be Still” (in its regional premiere at the Chance through June 2) seems like a garden variety comedy at the outset, but not for long; within minutes it’s clear the audience is in for a wild ride. The humor is more than a little outrageous at times but there’s a dark side to it as well. All told it’s a fast-moving 90 minutes that proves highly satisfying.

The characters are broadly drawn but not so far over the top you can’t relate to them. Sherry, an art therapist, has moved back into the family home; her depressed sister Grace lives on the couch with the TV remote in one hand and a bottle of whiskey in the other. The actors are energetic and quick on their feet, especially Piper Power (Sherry), who’s quite engaging as the teacher as well as the play’s narrator.

“Elena Ferrante on Film” (now available from Film Movement on Blu-ray and DVD) offers a pair of films adapted from the work of the popular novelist. “The Days of Abandonment” questions motherhood and womanhood. “Troubling Love,” which won the Palme d’Or at the Cannes Film Festival, centers on relationships between mothers and daughters; both films won a pair of Italian Golden Globes.