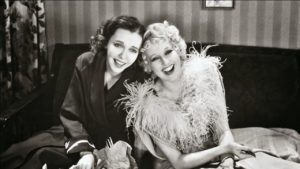 ZaSu Pitts and Thelma Todd in a Hal Roach comedy.

They punch holes in walls, set desks on fire, toss shoes out windows, trade insults and joke incessantly when they’re not stuffing themselves with bagels. They’re the anything-for-a-laugh gang of comedy writers who turned out one of the top television shows of the 1950s, despite behind-the-scenes antics that are the stuff of legend. And that in a nutshell is the basis of Neil Simon’s “Laughter on the 23rd Floor” (through June 23 at Newport Theatre Art Center).

Simon had the good fortune to write for TV comedian Sid Caesar, along with Mel Brooks and others; this semiautobiographical play is one of his best, and this production, while not flawless, is a fine complement to his intent. Director Brian Page has assembled a first-rate cast who have just the right chemistry; the play also works because he trusted the material enough to put the actors through their paces without forcing the jokes.

Two decades before Lucile Ball—one of Caesar’s contemporaries—cavorted with Vivian Vance (Ethel) on “I Love Lucy,” the producer of Laurel and Hardy’s popular comedies created a distaff version of the slapstick dream team. “The Hal Roach Comedy Shorts of Thelma Todd, ZaSu Pitts and Patsy Kelly” by James L. Neibaur (available in paperback from McFarland & Co.) offers a worthwhile film-by-film look at the series.

Todd (who often co-starred with Stan & Ollie and other top funnymen of the era) and Pitts (who starred in Erich von Stroheim’s “Greed,” and was eventually replaced in the duo by Kelly) created the mold for female comedy teams to come. Neibaur sums up the plot of each film, analyzes their weaknesses and strengths, discusses the directors’ contributions and gives us a snapshot of the critic’s reviews. This handy guide to these often very funny short films is perfectly timed, with both the Todd & Pitts and Todd & Kelly series recently issued on DVD.

This weekend in So Cal: The Phil Norman Tentet ushers in the free summer jazz concert series June 7 on the Argyros Plaza at Costa Mesa’s Segerstrom Center for the Arts. The series, emceed by KJAZZ host Bubba Jackson, continues through the end of August…“Go West,” one of the strangest films Buster Keaton made in his heyday, screens in 35mm Saturday June 8, 2pm at the Autry Museum.