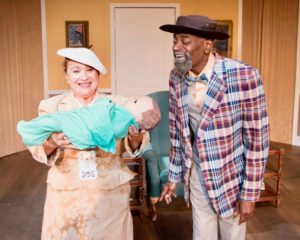 Roxanne Martinez and Henry Weaver in “The Hatmaker’s Wife.” Photo by Mike Hardy.

Lauren Yee’s “The Hatmaker’s Wife” (through July 6 at Long Beach Playhouse) is that problematic play that wins you over in the end. You want to like a play by a happening young Asian American playwright, inspired by the folktales of Sholem Aleichem—especially after Yee’s “In a Word” proved such a captivating experience at the Chance Theater two seasons ago—but it doesn’t get off to a great start. Act I has its moments but it’s far too long and spends way too much time focused on a depressed man sitting in a chair.

Act II is a considerable improvement, partly because the guy in the chair—Hetchman (Tod Walker), the hatmaker whose story this is moreso than his wife’s—brightens up and becomes much more animated. Another issue is that much of the play’s running time is taken up with a young couple (Amara Phelps and Jeremy Cooley), whose new home was formerly inhabited by the Hetchmans—who are pleasant enough but not terribly compelling.

This surreal fantasy has much to delight the patient theatregoer. The wonderfully inventive direction of Shinshin Yuder Tsai goes a long way toward making it work. In a solid cast it’s the supporting players who really shine and give the play its pizazz—Rose London as Hetchman’s long-suffering wife, Henry Weaver as Meckel, the couple’s neighbor, and Roxanne Martinez as The Wall of the home. Andrew Wilcox’s sound design also contributes to the show’s success.

Florence, 1348. A horse-drawn cart of corpses moves through the street. People are “dying without ever having lived,” as one woman tells her sister. You don’t have to look far for parallels to AIDS at the outset of “Wondrous Boccaccio,” just as you have don’t have to look far for picturesque old buildings and walls in Italy regardless of the century.

This picture (available on DVD from Film Movement) is not so much about The Plague, however. It’s centered on a group of young people who escape to a villa where they bake bread, drink wine and tell each other tall tales—as Giovanni Boccaccio did in “Decameron,” the 14th century masterpiece that provides the basis of the film.

The writing-directing team of Paolo and Vittorio Taviani have made spectacular use of color in a movie notable for its lush photography (by Simone Zampagni) and authentic-looking costumes and sets. The stories within the story are romantic, clever and sometimes bawdy; my favorite concerns a falconer and his love for a woman with a young boy who adores the bird—with an ending worthy of O. Henry.