“The Landlord” on Blu-ray, “Strong Arm” in Santa Ana 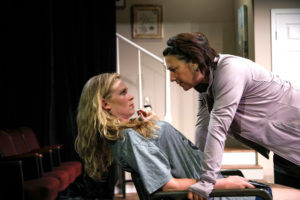 Best new play I’ve seen in a long time? That would be “Strong Arm” by Wyn Moreno (continuing in its world premiere at Grand Central Art Center in Santa Ana through Jul. 28). This riveting drama centers on the world of professional sports, and one promising young ballplayer in particular. It’s based on “The Seagull” by Chekhov but unlike the titular character in the latter, which fails to delivers on its promises, “Strong Arm” hits a grand slam, grabbing the audience’s full attention right off the bat and excelling in its emotionality and physicality.

Mark Stevens does a fine job of directing this Wayward Artists production, rubbing the characters up against each other and letting the sparks fly. If one performance stands out in the first-rate cast it’s Marika Becz as the mother of the youthful athlete and a former tennis champ herself, who’s as fiercely protective as a lioness of her cub. Dan Keilbach displays both strength and vulnerability as the young man in question, while Autumn Paramore and Joseph Dunham create sparks of their own as an advisor and a fading superstar. 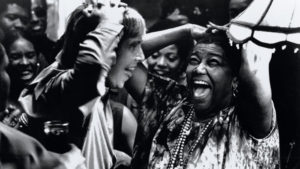 Beau Bridges and Pearl Bailey in “The Landlord.”

The picture that inaugurated the directorial career of Hal Ashby, “The Landlord” (new on Blu-ray from Kino Lorber), is one of the more noteworthy home video releases of the year. This outrageous comedy about racism, made in 1970 when black-white tensions were at their volatile peak, is remarkably edgy for its vintage and more timely than ever. In the words of producer Norman Jewison, it was “a very quirky film…people weren’t ready for it.”

Beau Bridges is a wealthy young man at odds with his parents’ privileged Long Island lifestyle who tells his mother he’s going to do whatever he damn well pleases, and does. To her horror he buys a rundown tenement in a black neighborhood, three doors down from a chitlin and rib joint; he also gets a bit more intimately involved with the tenants than he planned.

Lee Grant deservedly won an Oscar nomination for her role as Bridges’ mother. Pearl Bailey, Diana Sands, Louis Gossett Jr. and Marki Bey also offer memorable performances. Scripted by Bill Gunn from a novel by Kristin Hunter and full of outlandish dialogue and situations, it’s a film that could only have come as fully to life as it does through the offbeat sensibilities of Ashby—arguably the greatest filmmaker of the ‘70s—and the striking cinematography of Gordon Willis.

Kino Lorber did not stint on the bonus material. Bridges, Grant and Jewison discuss Ashby’s loose, improvisational style in separate interviews, remembering him as “a wonderfully warm, gentle soul.” Together the interviews form a mini-documentary on the director, going beyond expectations; the theatrical trailer is also included.