Much ado about the Bard in Orange County 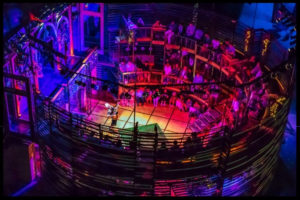 To apply the proverbial lemons from lemonade to Shakespeare Orange County would be something of an understatement. Clearly the company has landed on its feet after being ignominiously booted from Garden Grove Amphitheater, falling into the welcoming embrace of Santa Ana College. If you hurry you can catch the second and final weekend (through August 4) of their sexy and stylish production of the seldom-staged “Antony and Cleopatra,” in the intimate Black Box theatre of SAC’s Phillips Hall.

Shakespeare sometimes gets lost in Act One of this complex drama, as set deep in the Roaring ‘20s, but the essence of the play is there; certainly the debauchery of the era is a perfect metaphor for the hedonistic Roman Empire. John Walcutt goes over the top as Antony but offers a masterful seriocomic death scene in the play’s climax. He has terrific onstage chemistry with Tess Lina’s sensitive and comparatively subtle Cleopatra; her own demise is pure poetry under Peter Uribe’s attentive direction.

If you’ve never experienced the New Swan Shakespeare Festival at UC Irvine—or even if you have—I highly recommend it. Year after year, they offer some of the most exciting productions of the Bard’s work in So Cal. Performances are almost always superb, with the same cast typically doubling up for both shows each season, in true repertory fashion. “The Merchant of Venice” and “The Two Gentlemen of Verona” run consecutively through the end of August; the festival’s Shakespeare Weekend (Aug. 10-11) offers free afternoon seminars on the plays.

If free is a better fit for your budget, Shakespeare by the Sea may be your best option. The festival, which travels to more than 20 communities in three counties, presents “Comedy of Errors” and “Henry V” for its 21st season in venues scattered throughout So Cal.

Finally, if you’re in the mood for something new and different instead of the same old same old, you’ll want to check out OC-centric, the 9th annual festival of new plays at Chapman University in Orange. This year’s program, comprised of three one-act plays, promises a full evening’s entertainment.