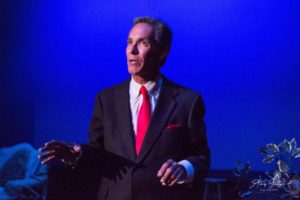 “Damn Yankees” is one of those old-school musicals they’ve forgotten how to make. When the Douglass Wallopp-George Abbott show (with music and lyrics by Jerry Ross & Richard Adler, based on a novel by Wallopp) first opened on Broadway in 1955 it scored a solid home run, packing the bleachers for two and a half years. It doesn’t get revived as often as it deserves today, which makes the Stage Door Repertory Theatre production (running through Sept. 14 in Anaheim) all the more welcome.

The show hits more often than it misses under Nick Charles’ sure-footed direction, and Kyle Short’s musical direction. Glenn Freeze knocks it out of the park as Applegate, the devil, who offers middle-aged baseball fanatic Joe Boyd the Faustian bargain of a lifetime, to play ball with his favorite team (the Washington Senators) and help them win the World Series against the Yankees.

It’s a joy to see Freeze wax nostalgic over the evil he has wrought through the years in one of the show’s best songs, “Those Were the Good Old Days.” (The role of Applegate is double cast, with Nick Charles joining the lineup Friday for the second and fourth weekends, and Freeze returning for the third.)

The production is well cast, with choreographer Lori Lewis a standout as Gloria, the sportswriter who dubs our boy “Shoeless Joe from Hannibal, Mo.” Richard Comeau and Sherry Domerego strike just the right note as super fan Joe and his patient wife Meg, without overplaying it; Matthew Silver has strong stage presence as young Joe Hardy, who materializes to make Boyd’s dream come true.

The ensemble may be a little uneven but they’re up to the challenge. More importantly they’ve got heart, miles ‘n miles of it. However, the show falls short when it comes to Lola, the sexy seductress Applegate employs for his dirty work; Linsey Rene seems to understand what the part calls for but fails to deliver the goods. She may have heart but not much pizazz.

Best Labor Day Weekend event in OC? That would be “Page to Stage 2019: That’s What She Said,” a playwrights festival featuring five new, unpublished plays that celebrate the female voice. Directed by Heather Enriquez, the festival is produced in partnership with Project La Femme. All staged readings take place Friday-Sunday at the Curtis Theatre, located in the Brea Civic and Cultural Center, 1 Civic Center Circle, Brea.

Saturday August 31, members of Pacific Symphony (conducted by Greg Flores) present “Canto de Anaheim,” a free concert celebrating the Mexican-American heroes of Anaheim’s past and present. This performance, hosted by native son Gustavo Arellano, embodies the people and history of Anaheim through powerful storytelling paired with musical selections by Mexican composers. The concert “under the stars” begins at 7 p.m. at Pearson Park Amphitheatre, 401 Lemon St., Anaheim.

If you prefer the music of days gone by—namely the ragtime era—make your way to the Curtis Theatre for RagFest 2019, Saturday September 7, both afternoon (noon to 6 p.m.) and evening (a revue show beginning at 8 p.m.) Most of the performers from last year’s festival are returning, including Brad Kay, Tom Marion, Paul Orsi, Evans & Rogers and host Eric Marchese, plus some new acts such as Elliott Adams and the RagFest Ensemble. This year’s festival is dedicated to local ragtime banjo player Jimmy Green, who recently passed away.