“Butler Monologues” and “Family Matters” in Fullerton, RagFest in Brea 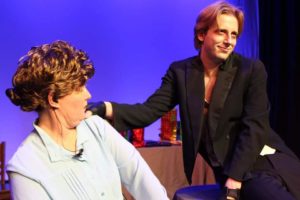 The butler did it, that much is certain in Jeff Lowe’s hilarious new show, “The Butler Monologues” (presented by Alchemy Theatre Co. at Fullerton’s STAGEStheatre through Sept. 22). But whodunnit in this outlandish murder mystery comedy? Alfred from “Batman”? Kato from “The Green Hornet”? Lurch from “The Addams Family”? Riff Raff from “The Rocky Horror Show”? Naturally, it’s up to Alice, the maid from “The Brady Bunch,” to solve the crime and figure out who did what to whom, and how.

This clever mash-up of familiar characters has the spirit of a Marx Brothers farce yet is crammed with up-to-date in-jokes and pop-culture references. If some were a little too obscure for older audience members like myself, the ripples of laughter from the opening night crowd were evidence that Lowe’s bon mots repeatedly hit their targets. Though the show is a little on the long side, it would appear to have a future on the dinner theatre circuit ala “Gourmet Detective.”

Jared Boyd Miller (as Riff Raff) and Jeff Jacobs (Lurch) scored high marks on the guffaw meter under the attentive direction of Ryan Holihan. Kathleen Switzer (Alice) held her own among the otherwise all-male ensemble. Paul Burt (Mr. Belvedere) and Steve Biggs (Alfred) added to the fun by underplaying their roles amid the chaos.

“Family Matters,” the tenth production of playwright David Macaray’s work at STAGEStheatre (through Sept. 22), is business as usual—funny. The first of two one-acts, “The Affair,” might be described as a sex farce without sex. The perfect set-up for a bit of hanky panky—bored doctor’s wife invites the gardener over for a rendezvous—quickly goes awry. Both, it seems, have issues to resolve.

If you think your family is dysfunctional, you may count your blessings after “Megan the Merciless.” When a successful author returns home after a three-year absence to visit her sisters, the result is not pretty. Sibling rivalry and latent hostility is bound to come to the forefront when radically disparate lifestyles are compared.

Philip Brickey directs with flair. Christine Cummings (the bored, cynical wife in the first play) and KC Marie Pandell (the obnoxious author in the second) have a field day with the material. Both pieces are a little dialogue-heavy and could be improved with trimming.

With a big percentage of what’s anticipated falling short on its promises these days, it’s a pleasure to report the recent RagFest 2019 at Brea’s Curtis Theatre exceeded all expectations. The evening ragtime revue, organized and emceed by Eric Marchese, was a proverbial embarrassment of riches with one performer topping another.