“The Canadians” at South Coast Rep, “A Wolf’s Mother” at the Garage Theatre 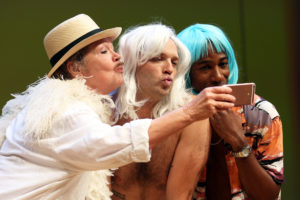 If it goes without saying South Coast Repertory is among the most consistent purveyors of high quality theatre in So Cal, not every offering meets expectations—at least mine, which may be different from yours. Adam Bock’s “The Canadians,” the latest SCR-commissioned play to make its debut (through Oct. 20 in Costa Mesa), is a case in point. Granted, I may not be the target audience—it’s a play about gay men, written by one of their own—but it failed to measure up for me.

Bock’s comedy-drama is basically about two guys, Gordy (Kyle T. Hester) and his partner Brendan (Daniel Chung), who decide to take an all-gay cruise to the Bahamas; Gordy nervously leaves his comfort zone and makes some self-discoveries in the process. There is much to amuse here though the situations are often silly or trite, such as when Brendan goes off with another man and makes Gordy jealous.

That the funnybone gets a workout there’s no question. In the opening scene a character expresses a preference for work over hockey and is told, “Get your priorities straight, man!” The director (Jaime Castañeda) and the costume designer (Denitsa Bliznakova) apparently had a ball but the actors seem to be having the most fun, especially Corey Dorris, Linda Gehringer and Corey Brill, all of whom play multiple characters and switch genders. But for all the fun there is a lack of substance to take away; I expect a little more to chew on from SCR.

Conversely, there’s plenty of meat on the bone in Cary J. Simowitz’s “A Wolf’s Mother,” presented by Panndora Productions at the Garage Theatre (through Oct. 20 in Long Beach). Not much to laugh at of course, in the tale of Kathleen Bower and her estranged adult son, and how he evolves into the monster the world will soon know as Charles Manson, but plenty of food for thought. What might have happened if she hadn’t coldly thrown him out of the house once and for all when he came calling unexpectedly one night in 1967?

“Why would I want to see that?” you may wonder, as I did when I first heard about the play. Trust me, you do if believe in the power of theatre to tell stories as only theatre can, compelling in a way that television almost never is. When most of the set is literally lines drawn in chalk on a black background, the actors have nowhere to hide; it’s all about the words, and the black magic actors weave as they interpret those words. And the actors, notably Karen Wray (as Kathleen) and Joshua Evans (who bears a scary resemblance to Manson), grab hold of your attention and never let go under the taut direction of Sonja Berggren.