BeauSoleil at the Barclay, Beethoven at SCFTA, “Doc Martin 9” on video 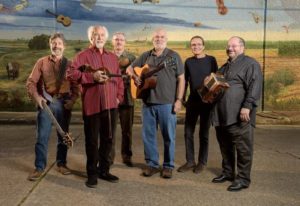 BeauSoleil at the Barclay.

The Coach House in San Juan Capistrano calls itself Orange County’s Premiere Concert Venue. To me they fail the acid test of a venue worthy of that label—good acoustics. The Irvine Barclay Theatre, that modest little auditorium on the UC Irvine campus, isn’t perfect (as “Die Fledermaus” proved last spring) but when it comes to concerts, they’re far more reliable. What the Coach House inflicted on BeauSoleil on my last visit there should not happen to any band; their appearance at the Barclay on Saturday, Feb. 29 promises to be one of the highlights of the season.

BeauSoleil would be that Grammy Award-winning musical gumbo of Cajun, zydeco, New Orleans jazz, blues-rock, country and bluegrass—in essence the music of French Louisiana. Led by bandleader-fiddler-vocalist Michael Doucet, the group received a Lifetime Achievement Award at the recent Folk Alliance International Conference in New Orleans. After 45 years and three dozen albums, what can you expect from BeauSoleil? At the very least—to paraphrase a square dance caller of my acquaintance—music that makes your pants wanna get up and dance.

In a sense you never know what you’re going to get at the Segerstrom Center for the Arts, OC’s preeminent music venue. It could be Itzhak Perlman cracking jokes worthy of Victor Borge, as the maestro did at his January concert. It could be Midori and Jean-Yves Thibaudet tackling Beethoven’s Complete Violin Sonatas, as the pair did in a recent marathon weekend at SCFTA, courtesy of to the Philharmonic Society of Orange County.

To be sure the Japanese violinist and the French pianist delivered the technical virtuosity they are renowned for, but Midori’s unusual technique—adopting an athletic stance more akin to an archer at times—is best appreciated in live performance, as is Thibaudet’s pastoral elegance at the keyboard.

The Philharmonic Society continues its celebration of Beethoven’s 250th birthday at SCFTA with Joshua Bell and the Academy of St. Martin in the Fields performing Symphony No. 5 (Mar. 3), the Rotterdam Philharmonic Orchestra playing Piano Concerto No. 5 and Symphony No. 7 (Mar. 24), and the L.A. Chamber Orchestra chiming in with Symphony No. 3 (May 15). The Society also serves up a pair of the Bee’s Violin Sonatas at the Laguna Chamber Series, with Augustin Hadelich, violin, & Orion Weiss, piano (Mar. 26) and Bomsori Kim, violin, & Rafal Blechacz, piano (Apr. 19).

Those perpetuating “Doc Martin,” the delightfully quirky Britcom set in Cornwall, U.K., deliver exactly what’s expected. Jack Lothian and the other writers on board for Series 9 (available from Acorn Media on DVD and Blu-ray) know the off-the-wall characters who inhabit the fictional village of Portwenn inside and out, from the titular M.D. with the blood phobia (the wonderful Martin Clunes) to Bert and Al, the bickering father and son team (Ian McNeice and Joe Absolom), Doc’s wise old aunt (Eileen Atkins) and the dim-witted village constable (John Marquez).

There are plenty of surprises nonetheless in the latest season of the popular show created by Dominc Minghella, celebrating its 15th anniversary. It’s almost always in the writing a long-running program disappoints; happily, this one never does. Expertly plotted from the first moment of Episode 1 to the final scene of Episode 8 (which features Tom Conti as Doc’s mentor), the show is short of neither humor nor conflict. No one would blame those involved for packing it in at the top of their game, but hopefully they’ll pull another rabbit out of the hat a year or two from now.