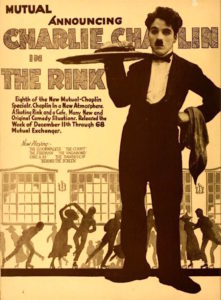 If you’ve always wanted to attend the Pordenone Silent Film Festival—Le Giornate del Cinema Muto in Pordenone, Italy, where I had a blast in 2017—now’s your big chance. The 39th edition of the festival will be an online event this year. In collaboration with movie archives worldwide, they plan to present an assortment of riches October 3-10 with musical accompaniment, plus online discussions with scholars, archivists and musicians.

Speaking of Charlie, he graces the cover of my new book, “Comedy Tonight! Movie Comedy Advertising & Publicity: The Silent Era, Vol. 1.” This compilation of vintage magazine and newspaper ads and other ephemera takes a look at how Chaplin, Buster Keaton, Harold Lloyd, Laurel & Hardy, Roscoe “Fatty” Arbuckle, Mabel Normand and their contemporaries were sold to the movie-going public. 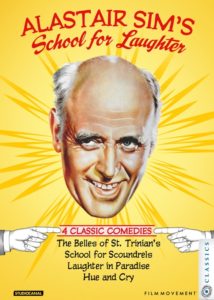 If the name Alastair Sim rings a bell, you most likely recall his stellar portrayal of Scrooge in the 1951 movie version of “A Christmas Carol.” While it was his own favorite among his 67 film appearances, this beloved British character comedian deserves to be remembered for so much more—as the 4-disc Blu-ray box set “Alastair Sim’s School for Laughter” (now available on Blu-ray from Film Movement Classics) makes clear.

Bonus material includes a booklet with notes written by film scholar Ronald Bergan, who compares Sim to W. C. Fields and French comedian Fernandel. There are also original trailers, and interviews with film critics and historians, plus one with Alastair Sim’s daughter, Meredith McKendrick.

“Hue and Cry” (1947) is as entertaining as it is obscure, but it’s an odd choice for the set with the top-billed Sim on view in little more than a cameo role, as a writer of comic book stories who’s delighted to “meet his public.” However, he has the funniest moments in this Ealing comedy by virtue of his wicked brilliant delivery of dialogue. The focus is on a gang of comic-obsessed kids led by Harry Fowler, who discover Sim’s tales are being used as code by a group of crooks; there’s terrific footage of ravaged, post-war London, as the kids run amok through the streets.

Sim again receives first billing in the ensemble film, “Laughter in Paradise” (1951), in which he’s a respectable author of lurid crime novels who stands to inherit £50,000. A strange will left by a practical joker (Hugh Griffith) requires the beneficiaries to do things that are a complete violation of character. Much of the fun is simply the way Sim plays it—a shudder rippling through his body as he commits a crime, as required by the will; his face gradually breaking into a laugh when he realizes the joke’s on him. Joyce Grenfell is Sim’s long-suffering fiancée; Audrey Hepburn has a bit part as a cigarette girl.

Though Sim takes a backseat to the stars of “School for Scoundrels” (1960), he has a key role as headmaster of the College of Lifemanship, “the science of being one up on your opponent.” He clearly savors every aspect of the part; perfect casting for a man who served as a lecturer of elocution at the University of Edinburgh before becoming an actor. Ian Carmichael is a pupil greatly in need’s of Sim’s teachings if he’s ever going to get anywhere with a “not quite blonde” (Janette Scott) of his acquaintance, with a flirtatious cad like Terry-Thomas standing in the way.

Sim is thoroughly in his element as the headmistress of the school of delinquent girls in “The Belles of St. Trinian’s” (1954), based on cartoons by Ronald Searle. What makes it all the more hilarious is the subtlety with which he plays the part, along with that of her twin brother, a bookmaker. I found it especially funny, in as much as I had the privilege of seeing Sim on the London stage in 1975 and meeting him at the stage door afterwards—where he introduced me to his sister, who looked just like him.