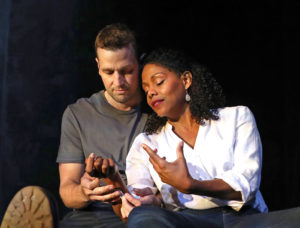 More than a bit of the blarney in So Cal next week. If the cluster of Irish films at the Newport Beach Film Festival tomorrow aren’t enough—see the previous blog—Dublin’s famed Abbey Theatre touches down May 2 at Chapter One in Santa Ana with a touring show, “Two Pints” by Roddy Doyle (“The Commitments”).

A special event tonight at the Newport filmfest is the 6th annual Easterseals Disability Film Challenge. Participants had 55 hours to write, shoot and edit a short film based on an assigned genre, with at least one disabled person in front of or behind the camera. A screening of the finalists’ short films at The Lot will be followed by a Q&A (winners have a unique mentorship opportunity with an established industry leader).

What happens when two cops fall in love? What happens when she’s black and he’s white? What happens when he shoots a suspect who happens to be African American? Kevin Artigue’s “Sheepdog” (in its world premiere through May 5 at South Coast Repertory) explores this conundrum with the zeal of a forensic scientist, offering a more compelling two-character drama than the recent “Heisenberg” at Laguna Playhouse.

Erika LaVonn may be the best actor you’ve never heard of, until now. She does the heavy lifting in this show as Amina, the female half of a Cleveland couple navigating the complex course of an interracial relationship with unusual stresses on it, a mercurial performance that simply dazzles. Lea Coco holds up his part of the bargain as her on- and off-duty partner, Ryan.

Leah C. Gardiner does a wonderfully inventive job of directing this play, manipulating her actors about in an offbeat fashion. As with “Photograph 51,” the set is a triumph of minimalism; Cameron Jaye Mock’s lighting design emerges as a key element in making the enterprise as visually striking as it is intellectually stimulating. If there’s a weakness it’s in Artigue’s narrative-heavy script. A little more show and a little less tell would be an improvement.

The Silkroad Ensemble: Heroes Take Their Stands,” to be presented by the Philharmonic Society of OC April 30 at Segerstrom Concert Hall, promises to be an extraordinary concert. Some 14 musicians will play the likes of viola, tabla, cello, bagpipes, taiko drums, and kemancheh (spiked fiddle)—the latter manned by Kayhan Kalhor, the virtuoso who has put Persian music back on the map. The Grammy-winning ensemble will portray the stories of five heroic figures, including Rev. Martin Luther King Jr.; Kalhor’s “The Prince of Sorrows” is one of five compositions.

Zakir Hussain’s Masters of Percussion, offered by the Philharmonic Society late last month, served as an appetizer of sorts for Silkroad Ensemble. Hussain’s tabla was accompanied not by a sitar player as per usual, but by a last-minute replacement on the violin, Ganesh Rajagopalan. The unusual combination elevated this concert of Indian chamber music to something special—and fairly exotic—at least in this neck of the woods.

But wait, there’s more—the Philharmonic Society presents the OC Youth Symphony’s season finale on Sunday, at Chapman University’s Musco Center for the Arts; the Bell-Isserlis-Denk Trio with Joshua Bell on violin, May 9 at Segerstrom Concert Hall; and finally Anne-Sophie Mutter on violin with Chamber Orchestra Vienna-Berlin in an all-Mozart program, June 25, also at SCFTA.